The mountainside of Kailash(Kailas) is a faint red platform with a circular groove on it, eroded by the ice and seems indented. Its summit looks just like a crown, so brilliant and shining all these time. Yet from afar, you can just see a rounded knap.

October23, 2005, a list of the most beautiful place in China was published in Beijing, and “the most beautiful place of China” campaign was conducted by the magazine “Chinese National Geography” and co-organized by 34 media all over the country. 8 months later, three sorts of awards came out, which are conducted by specialists group, media group and netizens group. The media group and netizens group each presented 12 places. Yet the specialists group of “Chinese National Geography” magazine presented the award in a different way, they subdivide  the award into 15 items, mountain, lake, forest, steppe, desert, Yadan landform, island, coast, waterfall, glacier, city, village and ancient town,  cave and wet land. Mt.Kailash(Kailas) was rated as one of the ten most beautiful mountains.

The rainy season starts in early July, and July and August have the most precipitation.

Routes into the mountain

You need to get a Border Pass for Mt.Kailash(Kailas), there is a checkpoint in Ba Ge which you will meet in the way from south route Ngari to darchen and from darchen to Burang, and sometime you may meet moving checkpoint. A small village Darchen will be a place for rest, which also known as Dajinsi. There is no bus here, so you can only choose free ride or chartered vehicle. Five routes are available, except the two pilgrim routes in Nepal and Indian, the other three are :

The south route is the most direct route to Mt.Kailash(Kailas). Up the valley of the Brahmaputra River you can enjoy the magnificent snow peak of Gangdiseshan, Kailash(Kailas) and the Himalayas, and have chance to meet Tibetan antelopes. This route comes from the tracing of cars, and has no maintenance, in rainy season, cars easy to get stall in past days, but now main rivers have road bridges, so there is no need to worry about sinking into the riverbed for days.

If you come from the south of Mt.Kailash(Kailas), available vehicle will be trucks commute between Shiquan River and Burang. It will be one and a half day drive with distance of 330km. if come from south; you can rent a car or hitch a ride to forward section by section. If the car won’t arrive in Dajinsi, you need get off at Bage checkpoint which is 7km south from the Dajinsi, and walk to the temple for night. 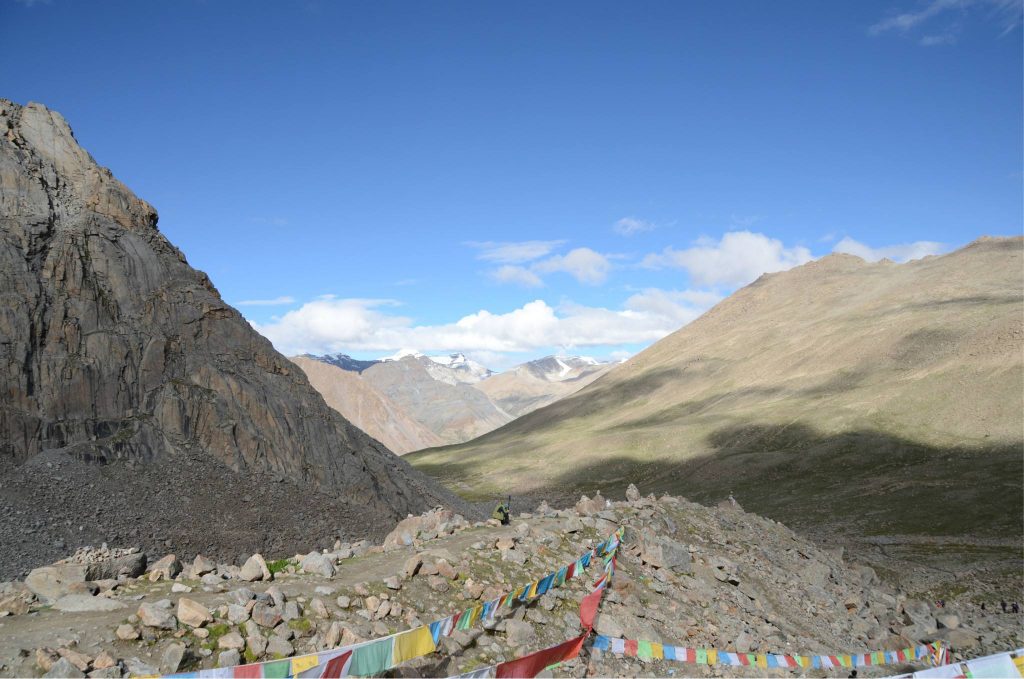 The village Darchen which at the south foot of Mt.Kailash(Kailas), is the foothold for travellers, and also the starting and ending point of Ritual-Walk .This small village facing the broad Bage plain, and a stream running through it. East to the stream, there is somewhere looks like a bazaar, you can see many camps, some of them sell instant noodles, crackers and some daily provisions, while some not. And also several humble eating houses which you should appreciated for it may be your last meal and next several days you would live on solid food if you plan to take ritual walks.

Kangdese hotel is the most famous hotel here, the highway is just before it, and it has the best facilities in this region. It has hot water and power supply and concrete platforms for camping in the yard. The power supply will last to 24:00. Above Kangdese hotel is a parking lot with a row of houses which is another place for night, and outside the east gate of the hotel is the famous Lhasa restaurant, it is a tent eating house rather than a restaurant, and its sign is quite plain which just two English words: “Lhasa restaurant”. Its owner is a couple, teacher Droma used to teach in TseDang high school, she runs this restaurant with her husband who also a teacher after retire. This place is simple and plain, but it is the best restaurant under the mountain. its food is more delicious than the Shandong dumpling shop nearby, besides, its price is rather fair, and has discount for college students. Another hotel nearby is Shenshan guesthouse, just beside Kangdese hotel, and also has power supply by its own generator.

Toward the west-northwest along the path from ridge, you can take marvelous picture of Mt.Kailash(Kailas). After a 1.5 hour walking along the path is the Selung temple, keep walking forward, and climb over the ridge you will arrive at Chuku temple in Laqu valley. It is the end of glacier under the south cliff and also the start of inner Ritual-Walk route which is only for those who have finished the 13 outer routes (the main routes of the Ritual-Walk, which will be introduced in detail later.) Across a river south to Kangdese hotel, and bypass a hill southeast to it, then climb over two hills farther north you can finally see the Gyangdrak temple, the journey generally will take 2 hours. Gyangdrak temple is the largest temple around Mt.Kailash(Kailas), it is said that thousands of years ago the Patriarch of Bonism Shenrab Miwoche have lived here, and one of the four Buddha’s footprints is in this temple too. There is an exit at the left, tourists who want to see the magnificence of this mountain, can enjoy the whole scenery of Mt.Kailash(Kailas) right here.( (according to different physical conditions, it will take about 4 to 6 hours to go there and back).

Southward: down south along the Xinjiang—Tibet highway from kashgar, it will take 3 days from Yecheng to Shiquanhe, and then transfer to Kailash(Kailas), yecheng is the actual starting point of Xinjiang—Tibet highway, but there is no public transport in this road, you can hitch a ride in Dengshan hotel or at the start of the highway. Waiting at the roadside for military vehicles head to Tibet will also be a choice, and the cost is about 400Yuan. The distance from Shiquanhe to the mountain is 480km, you can arrive in one day if everything goes well. The fare is 50-100 Yuan.

Westward: the other way is Wester from Lhasa. From Lhasa to Lazi you will go by Yamzhog Yumco Lake, if you take the old road, there is a chance to take a bird’s-eye view of the lake from summit. For the old rode is quite time consuming, you need to stay a night at Lazi or Xigaze, the fare is 15 yuan/person, here you can enjoy your best meal before reaching Ngari, because forward from Lazi has few accommodation. Dakaga, a town about 53km forward, is a best place to take pictures, then the next place is Sangsang, 65km forward, 10yuan/person for night, next is 22 Daoban, which situated at 122 kilometers forward, has signposts pointing to Ngari, to south and north.

1) The north route will take 6 days, bumpy but has good scenery, and you can see hot springs and geysers during your way. Stay Cuoqin county (242 kilometers of the road) for night,. The fare of highland gasthaus is 15yuan/person. 117km north from Cuoqin is Dongcuo, which is an intersection, there are trucks come here transport salt to Lhasa or Xigaze. 90km west from Dongcuo is Gaize, here you can find several Sichuan restaurant, stay for night will be 10 yuan per person. Forward is Geji, which is a better place for accommodation. The county guesthouse of geji charges 10yuan/person for one night. Here is 112km to Shiquanhe town, and you will feel this road is so smooth after several days’ bumpy ride. You can arrive at Mt.Kailash(Kailas) from Shiquanhe town in one day.

2) The south route is a shorter journey than the north one, it is about 4 days, but no free-riding, the only choice is chartered bus, moreover, this route is quite dangerous, if meet brown bear, you may lose your life. For these reasons, travelers are suggested to make a detour.

For centuries, Mt.Kailash(Kailas) has always been an attraction of pilgrims and explorers, but so far no one has been able to ascend this holy mountain, or still no one dare to offend the center of the world. Travelers put their attention to this holy land is only in recent years, and still not too many.

If you come from the south, the only choice is to hitch a ride, and forward section by section; While if you come from the north, the main vehicle will be trucks commute to Shiquanhe. 330km, 1.5day drive and about 50-80 Yuan for charge. Note: If the vehicle will not arrive in Dajinsi, you need get off at Bage checkpoint which is 7km south from it, and walk to the temple for night.

Kangdese hotel, 60 Yuan per person, deposit luggage 10 yuan per day, lf bring your own tents you can consult with the hotel to set up in their courtyard (outside is not allowed ), not free, 15 to 20 yuan per person, but relatively flexible.

Darkin hotel: the same price with Kangdese hotel and has power supply by its own generators at night.  You can also ask about accommodation in the tent restaurants, generally 20 Yuan per person, better to eat and drink in the same restaurant, buy vegetables and food from the owner and use their stove cooking by yourself is also available. Note: the two hotel charge higher price to foreign visitors, a same bed will charge 50-100 Yuan, and both of two hotels have no food supply. There are Chinese restaurant nearby, but the price is relatively high, a Shandong dumpling restaurant behind Darkin hotel has a good taste and price, opposite it is the Ngari plateau teahouse, its sweet tea is recommendable, and have some sweet tea before Ritual-Walk can be a good way to replenish energy.

Bring food is necessary, instant noodles, sausages and chocolate will be proper, food supply in Daikin is quite poor, so better to prepare before Shiquanhe and Lazi. Drinking water will be purified by water purifier. Temples you stay for night will also supply hot water and beddings, before the Ritual-Walk you should deposit these useless and heavy luggages in hotel, or the heavy load may cause physical strength overdraft, and it can be very dangerous in mountain. There are many porters waiting before the two hotels, charge 60 per day, you need to make the price clear and let the porter know the charging is paied by day, in case some porters quit in half way.

Westward from Lhasa, the capital of Tibet, via Xigaze, SaGa and finally to Burang, the whole journey is l433 km.

1.If you choose the south route along Xinjiang—Tibet Highway, May to October will be the proper time, for the mountain is blockaded by the snow in winter and spring, bring adequate warm clothing and medicine is necessary, due to the poor conditions of climate and accommodation along the way.

2. If you choose the west route, you need to notice these things: the round trip is 4000km, takes about 15 days, the rent of each car is about 10000—17000yuan, and along this journey, the last refueling point is in Lazi, which means during the 1600km from Lazi to Shiquanhe has no refueling point.  Time for sightseeing is May to early July and September to October, July to September is the rainy season, and the roads will be difficult.

3, Climbing season: generally May to late June, for this season has more fine weather, and it may last for 6 to 8 days, then is the rainy season which starting in early July, and has most precipitation in July and August. 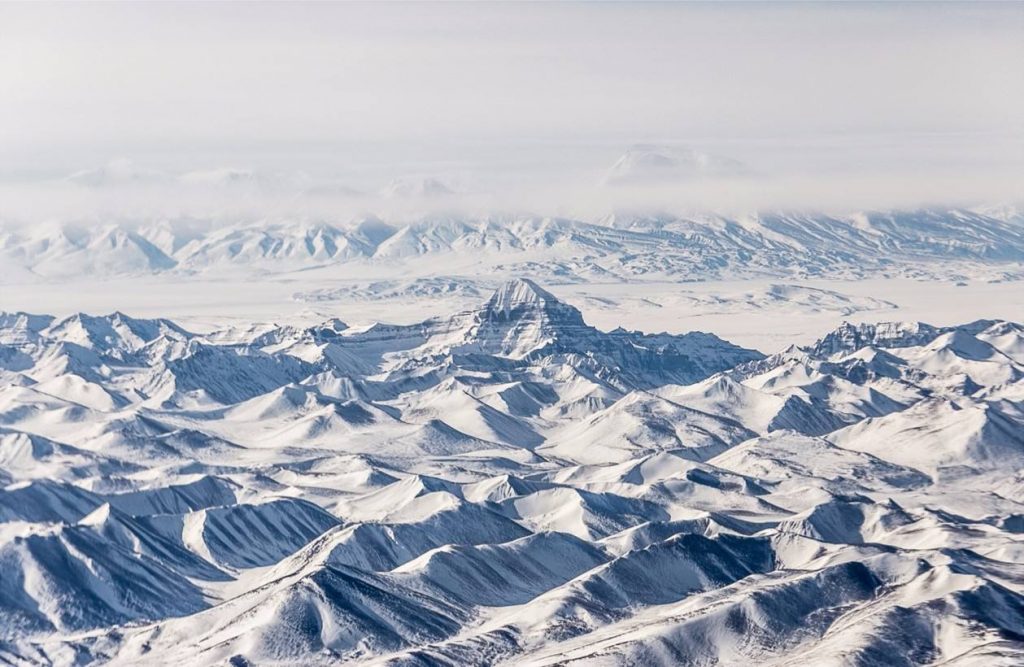 Mt.Kailash(Kailas) is a holy mountain, and the shrine of more than one religions,  May be for its divinity of “the center of the world” , no one dare to offend it so far, thus Kailash(Kailas) still a virgin peak today, the main activity is pilgrim circuit.

D1 (22km, about 10 hours): 5km west from Darkin—the entrance (a twenty meters high prayer flags stands on the Shuqi square here)—6km—-the riverside(temple on the hill across the river can stay for night)—15km—temple(stay for night)