Arrive in Beijing and transfer to hotel. Have a rest and free time after arrival. Stay overnight in hotel.

Sightseeing on today:
Great Wall of Mutianyu: in many sections of Great Wall in Beijing, this 3km-long section of wall is in Huairou county and less known. It’s renowned for the Ming-dynasty guard towers and stirring views.
Ming Tombs: The Ming Tombs are the final resting place of 13 of the 16 Ming emperors. Royalty took refuge here from the summer heat that roasted the Forbidden City.

Sightseeing on today:
Tiananmen Square: the world’s largest public square, and can watch the Gate of Heavenly Peace from a far.
The Forbidden City: So called because it was off limits for 500 years, the Forbidden City is the largest and best-preserved cluster of ancient buildings in China. It was home to two dynasties of emperors, the Ming and the Qing, in total 24 Chinese emperors.
Hutong Rickshaw Tour: A journey into the city’s Hutong is a voyage back to the original heart and fabric of Beijing. Many of these charming alleyways have survived, crisscrossing east-west across the city and linking up into a huge, enchanting warren of one-storey, ramshackle dwellings and historic courtyard homes.

Visit to the Temple of Heaven: A paragon of Ming design, the Chinese name actually means “Altar of Heaven”, originally served as a vast stage for solemn rites performed by the Son of Heaven, who prayed here for good harvest, and sought divine clearance and atonement.
And stroll in the Wangfujing shopping center; enjoy a kind of hustle and bustle life style for a while. There are also some old Beijing tradition shops, includes the famous Donglaishun-restaurant and traditional Shengxifu-Hat shop. Enjoy the delicious Peking-Duck as dinner. And then transfer to the train station for the night one to Xi’an. Or by the night flight to Xi’an city. 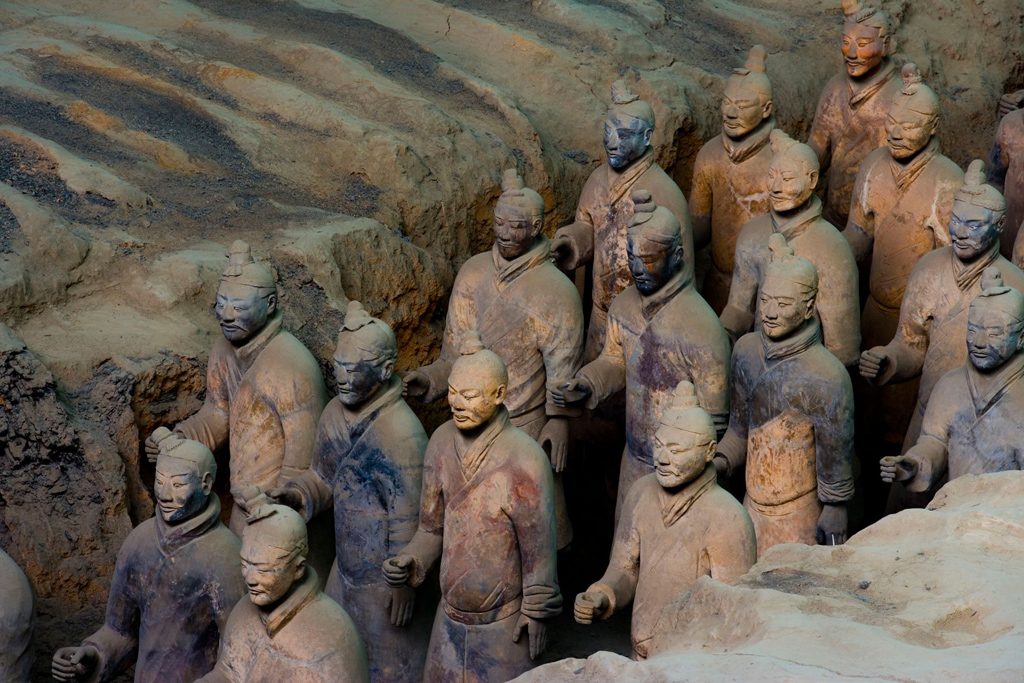 Day trip of:
Terracotta Warriors：one of the famous archaeological finds in the world. This subterranean life-size army of thousands has silently stood guard over the soul of China’s first unifier for over two millennia. Drive about 1.5 hours of 70km from Xi’an city of single way.
Big Goose Pagoda: as Xi’an’s most famous landmark, it’s dominates the surrounding modern buildings. It was completed in AD652 to house the Buddhist sutras brought back from India by the famous Tang dynasy monk Xuan Zang. Xuan spent the last 19 years with team translating scriptures; many of these translations are still used today.
Might experience the Chinese herbs market on the way.

Day trip of:
Shaanxi History Museum: it makes for an illuminating stroll through ancient Chang’an (the ancient name of Xi’an city). Most exhibits include labels and explanations in English.
City Wall: Built in 1370 during the Ming dynasty, the 12m-high walls are surrounded by a dry moat and from a rectangle with a perimeter of 14km. Xi’an is one of the few cities in China where the old city walls are still standing. You can also cycling around the wall if interested in.
Great Mosque: one of the largest mosques in China, the Great Mosque is a fascinating blend of Chinese and Islamic architecture. By the way walk around in the local market that combines all the traditional food of the Hui minority, such as barbecue, dumplings and other snacks.
Forest of Stelae: holds over 1000 stone stelae, including the nine Confucian classics and some exemplary calligraphy.

Fly to Chongqing, after arrival visit the E’ling Park. And in the evening aboard on the Yangtze cruise.

Enjoy the Yangtze cruise, via the sightseeing of the Ghost City-Fengdu, Little Three Gorge etc.

In the morning visit the Three Gorge Dam. After arrvial in Yichang, fly to Shanghai. Visit in Shanghai after arrvial:
Jinmao Tower: it’s Pudong’s most arresting modern spire and China’s second-tallest building (420.5m). There’s an observation deck on the 88th floor.
The Bund: Symbolic of old Shanghai, the Bund was considered as the city’s Wall Street, a place of feverish trading, of fortunes made and lost. The optimum activity on the Bund is to simply stroll, contrasting the bones of the past with futuristic geometry of Pudong’s skyline.

Today we make a day trip to the nearby garden city of Suzhou, Jiangsu province. Suzhou’s main draw is its gardens. The main activity is to visit the Garden to Linger In (Liu Yuan), the Humble Administrator’s Garden (Zhuozhengyuan), and the Garden of the Master of the Nets (Wangshi Yuan). Also experience of the Boat Trip in Suzhou’s river.

Transfer from hotel to airport and departure.