Climbing Season of Qizi Peak: in May or October

Address: the west side of Yangbajing, 97 KM from northwestern Lhasa in Tibet

Covered by snow all year round, the body Mount Qizi is round from the perspective of south, but it is very steep like a blade in north. The terrain is characterized by steep slopes in South and slight slopes in North; on both sides of the mountain there stands many peaks above 5,000 meters. The north slopes developed modern glaciers and the end of glaciers is around 5200 M above sea level. The average slope of the mountain is around 50 degrees, but between the Base Camp and the summit there are visible and invisible icy cracks which are too deep to see the bottom and dangerous. The body of Mount Qizi is constituted by gravels and icy snow, over 5500 M above sea level, covered by snow all year round. The south slope is comparatively slight and is easy to climb. However, the section, also the most dangerous section for climbing, from the altitude of 5900 M to the summit is a narrowly long ridge covered by snow, which is easy to encounter accidents of stumbles and falls. The north slopes are icy walls and cliffs of more than 50 degrees, inconvenient for climbing. The terrains from ABC to C1 are glaciers, with slight slopes. In spring or autumn, with less snow accumulation, as the main terrains are icy slopes and there are obviously visible cracks, climbers need to hang a rope over all those cracks. In summer, as the slopes and cracks are all covered by thick snow, climbers need to carefully explore the cracks inconveniently. In spring and autumn, from C1 to the summit, there are steep slopes and cross cornice, so the dangerous rate of icy slopes falling down is high. In summer, due to much thicker snow accumulation, there appear relatively less dangers of falling. Nevertheless, there are still risks of avalanche, so climbers should be closely aware of the time of going through cracks.

The climbing seasons are from May to September. There are more rainfalls in July and August, so the best season is in June, at the end of August or in early September. The temperature in the Base Camp of south slopes is from -3 degrees to 2 degrees at night in July, usually over 10 degrees at daytime, and 20 degrees when the days are sunny or there is no wind. As precipitation is affected by the large circulation, climbers should listen to the weather forecast of Lhasa in advance and make a climbing plan. Additionally, the lowest altitude of snow line is around 5500 M. Meanwhile, the south slope has been grounded into bread-like and slight peaks without any worries of avalanche, which is suitable for big groups to climb.

The traveling route is decided by the number of climbers, usually two kinds:

1, the team with more members usually put up the base camp at Galuo Temple and set up the advance base camp on glaciers.

2, the team with comparatively less members put up the base camp on level and flat ancient glaciers behind the mountain where Galuo Temple is located.

Here we introduce the route from Galuo Temple as the base camp.

Tourists drive from Lhasa along Qinghai-Tibet Highway and arrive at Yangbajing town by 80 KM. The road is made with asphalt and the road condition is good, around 2 hours needed in total. Tourists can turn left at3804 landmark of Qinghai-Tibet Highway, passing through Yangbajing town, marching towards Galuo temple direction, and arrive at the road at the foot of Galuo Temple, around 8 km in total. It is an old asphalt road, the asphalt is almost worn out and the gravels on the road are obviously visible. Starting from left side of the road, tourists will reach Galuo Temple along a narrow rocky road whose width is available for a bus. Tourists go down the road to the end, where stands Galuo Temple, a well-known Tibetan Buddhist nun temple. Beside the road in the due south of the temple, closely adjacent to a valley, there is the architecture built by Tibetan Mountaineering Association. In the front of the building, there is an area about 150 square meters available for putting up tents, which is the base camp (4700 M) of Mount Qizi. The left of the camp there is a raised ridge which just blocks the cold wind from the west, and the right side there is cliff wall which is not too steep. The camp is built along the direction of the mountain, first accommodation tents, medical room account, and then the kitchen tent and toilet tent, etc. In order to avoid the wind, the tent is opened to southeast. Generally speaking, the traveling route of Mount Qizi is simple, the transportation is convenient and supplies are easy to offer, so it is very fitting for primary snow mountain climbers. Here is a very convenient climbing route. 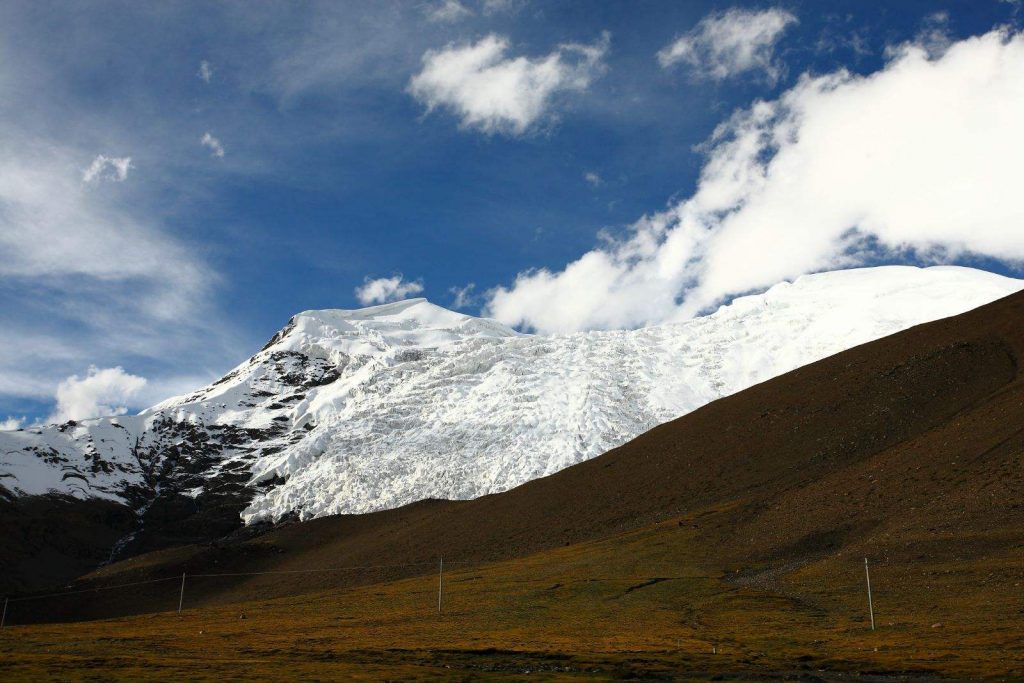 This mountain is the training base of Tibet Ozark Mountain School. With the opening of Tibetan Mountaineering Assembly, hundreds of people have reached the summit of Mount Qizi.

To climb from south slope:

Galuo Temple—BC (4700 M, this section of a slight slope needs from 7 to 11 hours.) –Bell Mouth (Tourists will reach the place under Bell Mouth along a slight slope. Bell Mouth is a snow slope with the length of 150 M and gradient of 70 degrees, which is the hardest section of the climbing route.)—the summit (Tourists can climb for another section, turn left and reach the summit after passing eaves. Climbing outwards is forbidden, to avoid collapse of eaves. 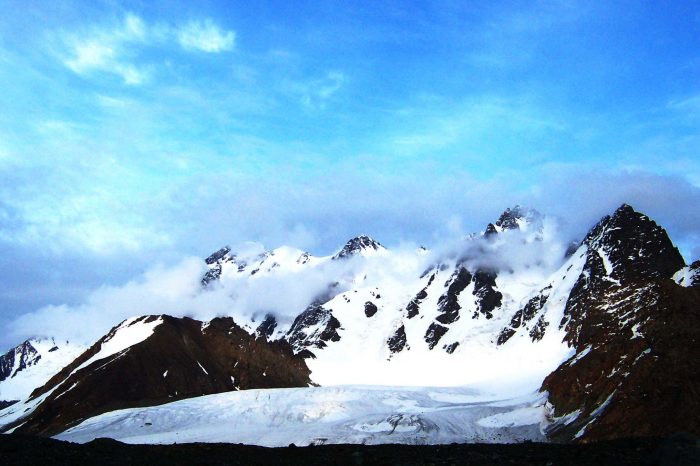 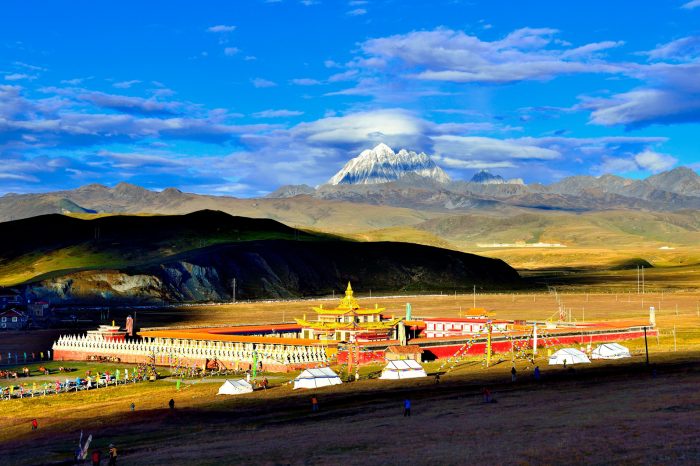 Trekking on the King of Sichuan Mountains Minya Konka in Kham

Highest mountain in Sichuan province, also known to locals as “The King of Sichuan Mountains” 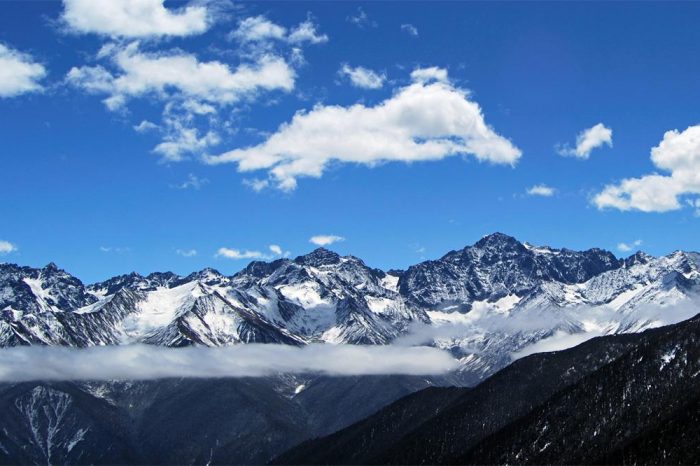